All mommies from WTE Welcome

You are not connected. Please login or register

Am I being petty? 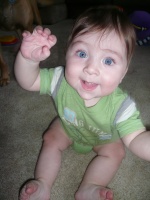 My Aunt is renting a cabin about an hour away from home and a bunch of my family will be there. She wont be here for Christmas so she wanted to get the normal bunch that would be there. My husband is going to be deployed before Xanders birthday so I asked a while back when we should do his birthday party. They are the ones that suggested doing it before he leaves, meaning December. Well my grandma suggested we do in the weekend at the cabin. I said i would decide who else to invite and my aunt wanted to know who I wanted there because she thought I would just do family only. I told her I wanted his grandparents (aka the hubbys parents) there and maybe the couple that I work for. She said that was fine. Then she texts me tonight that my grandma only wants immediate family there. Are you freakin kiding me. I seriouly can't invite his grandparents? Are 2 extra people going to make a difference. I had already said the others weren't a MUST. So I told her it was to hard planning a brithday at a place I didn't know anyways so we wouldn't do it. I don't want a arty with them if they are this petty. Am I being silly and depriving Xander of a big party? Be honest I can take it.

Posts : 9
Join date : 2009-10-12
Honestly you aren't. As a person married into a HUGE family, the more people around an infant can sometimes spell disaster. They get so overstimulated with so many people there. DH's family alone has about 22 "immediate" family members.

If they won't let DH's family come, then have a small party at the cabin, and another small party with his family. That way Xander will not be overwhelmed and you won't have to get stressed out about family issues.

BTW... I know all too well how much family can SUCK!

Admin
Posts : 68
Join date : 2009-10-12
Age : 45
Location : Sheridan, Oregon
I think I would be irritated too. DH's parents are now part of your family and they have a right to be at the party too. They don't deserve to be left out. I can see why you would want to have it then so that your family could be there too. What a pain.

Posts : 11
Join date : 2009-10-12
Thanks. I think I am just so fed up with these people that this is really bugging me. They get so mad if you don't call or come by every two seconds yet they never call me or come over. If I tell them that I came by but no one answered they think I'm lying. I told them I even called them but that's not good enough. Why didn't I go to the back door. I have to jump through hoops for them for them to not nag me over everything.

Re: Am I being petty?